Hosted at Eastside Projects in Digbeth, PEA organised this public art discussion to talk about the public art works by artist Gillian Wearing with A Real Birmingham and Joanna Rajkowska with Soon Everything Will Change and the future of public art in Birmingham. As well as hearing from the artists themselves other speakers included Stuart Tulloch, curator at Ikon Gallery. 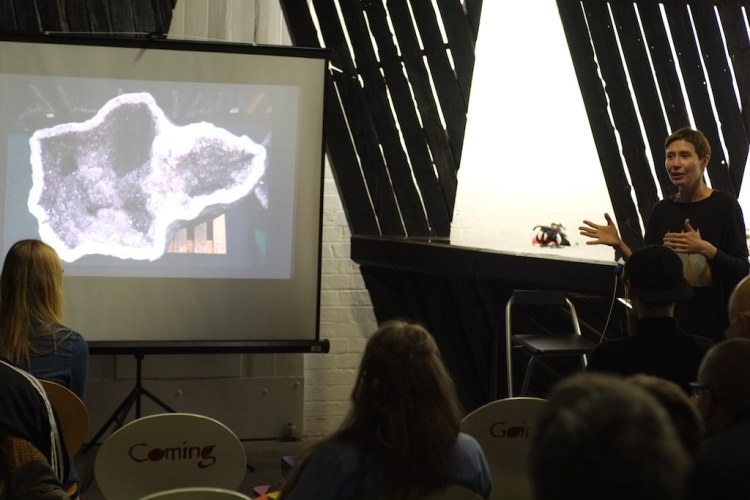 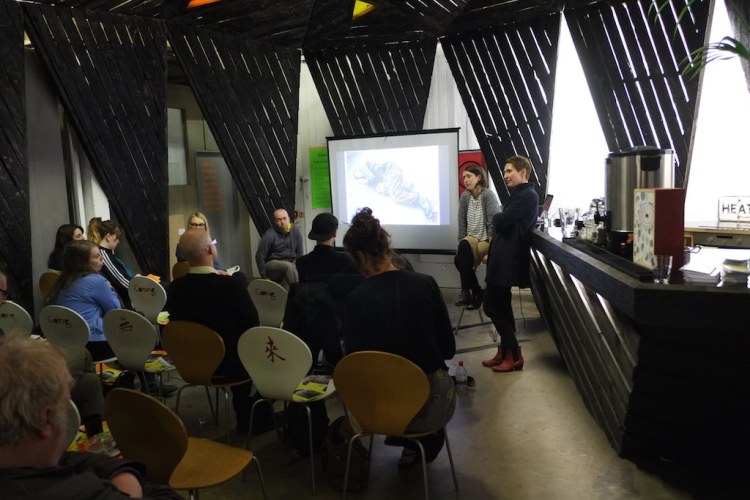 On Tuesday 3rd June, artist Joanna Rajkowska and curator Roma Piotrowska met for a public talk to discuss the art work for the Erdington project Soon Everything Will Change. The talk took place in the Erdington Library just beside the crystal installation which rested in the library courtyard for the public to freely visit and enjoy. 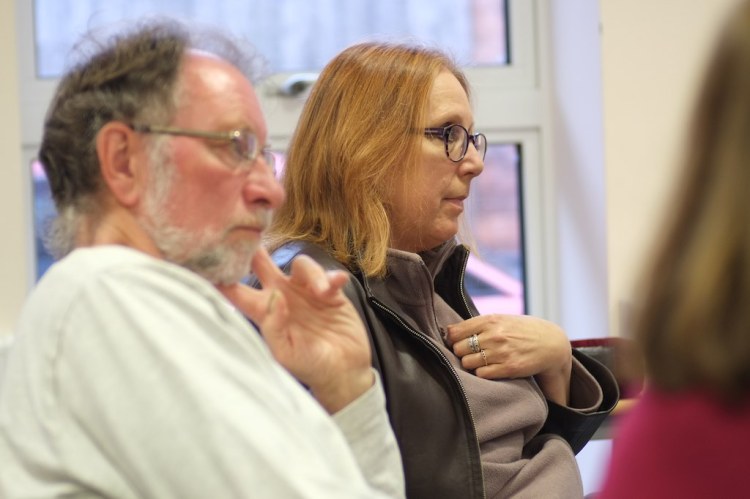 Soon Everything Will Change is a new temporary public project by artist Joanna Rajkowska, conceived in and for Erdington, a district of Birmingham. The core of the project is a large crystal formation installed in the patio near Erdington Library.
Photos by Richard Short 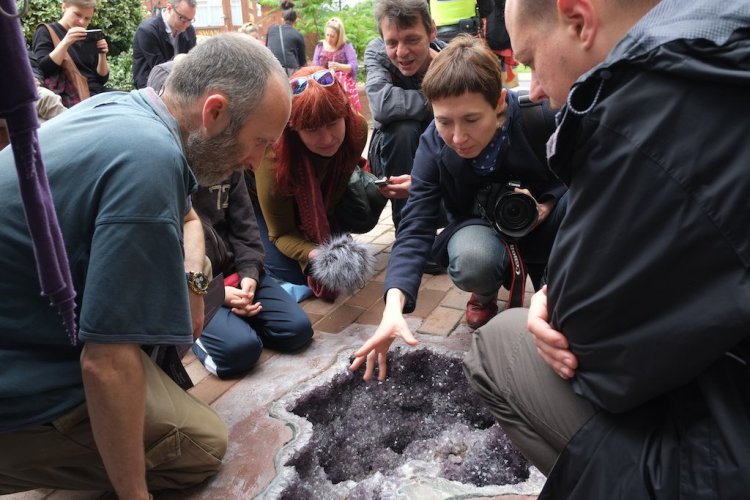 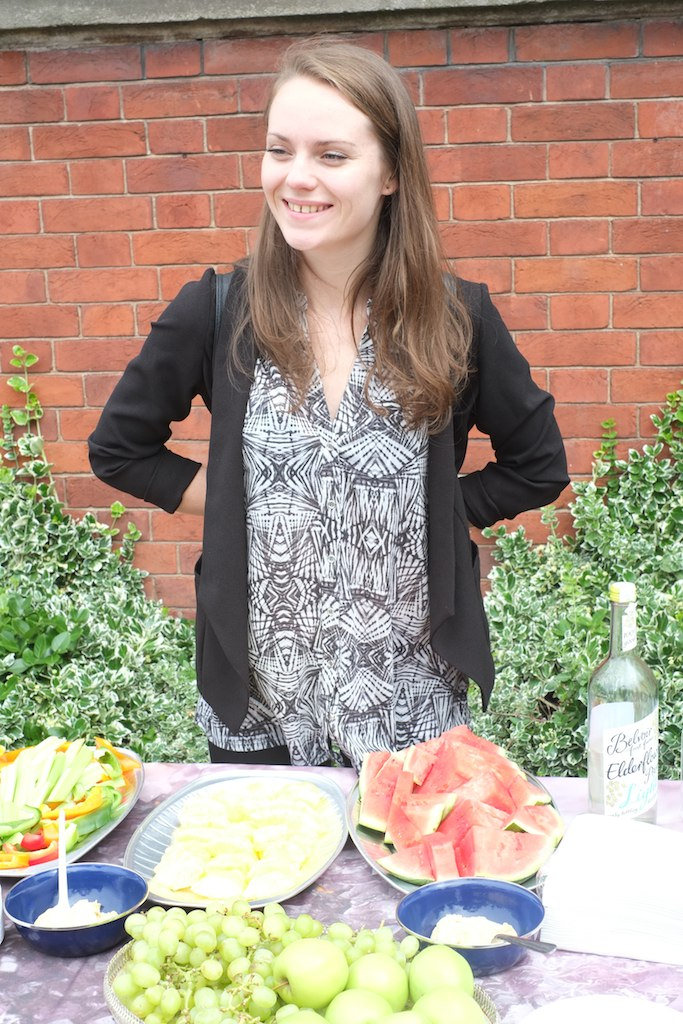 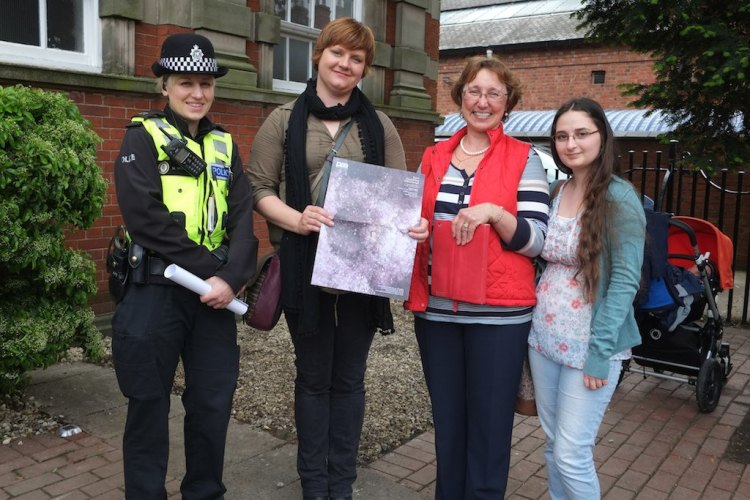 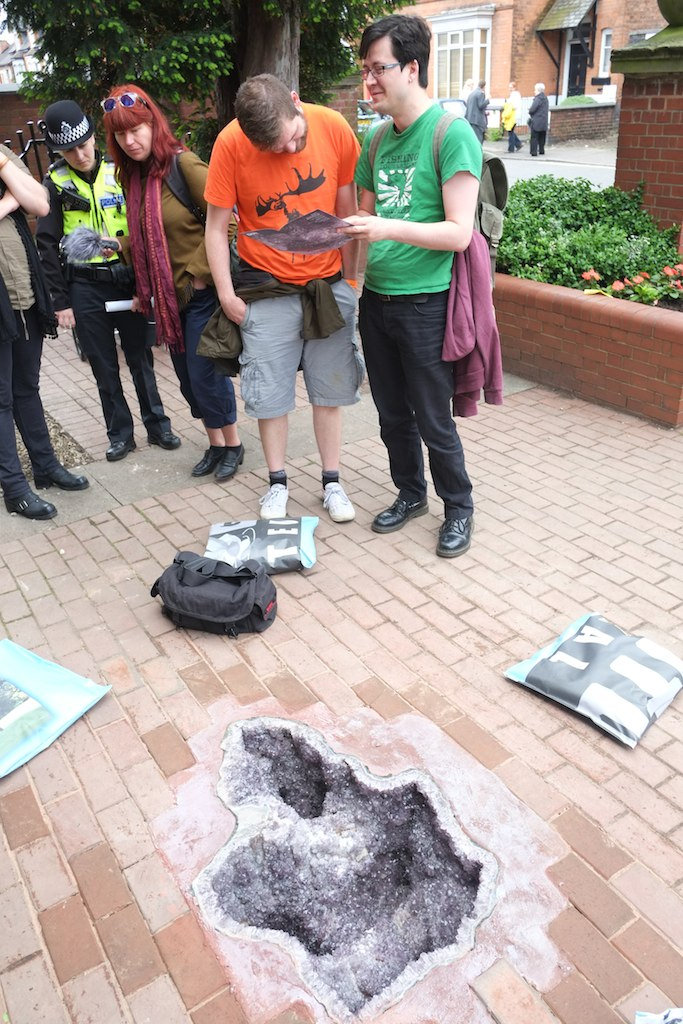 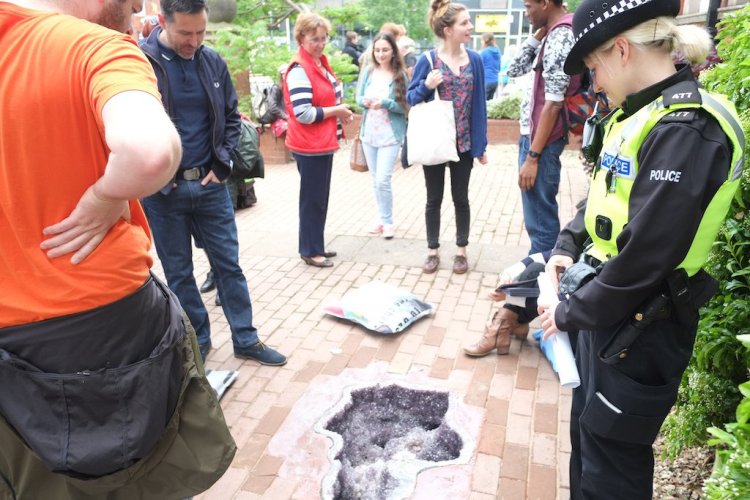 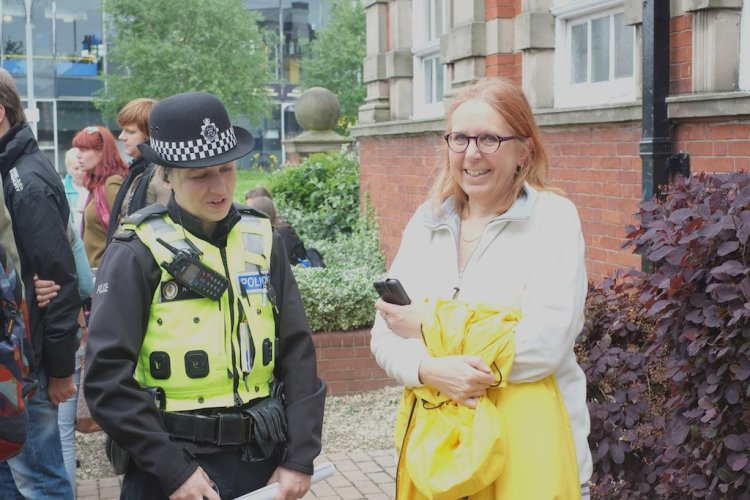 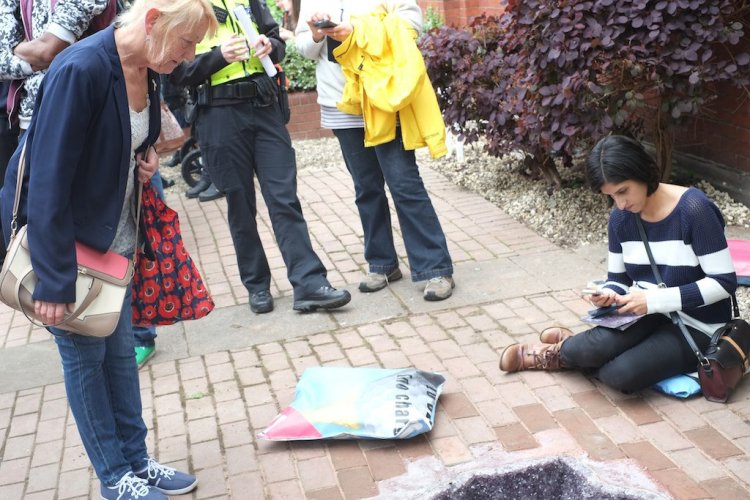 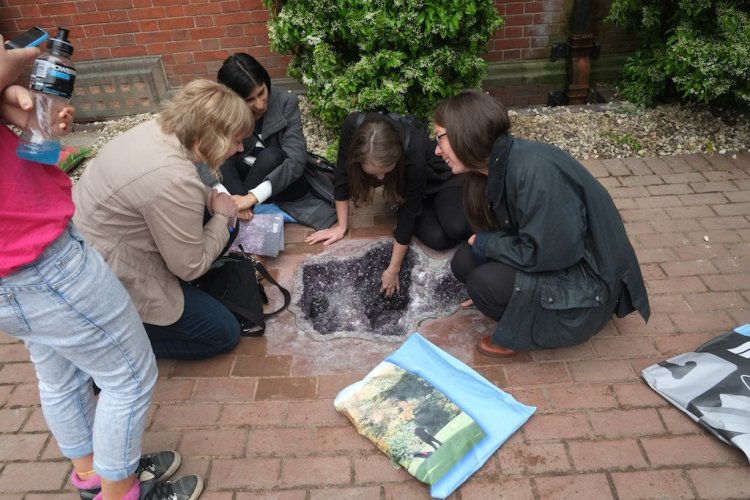 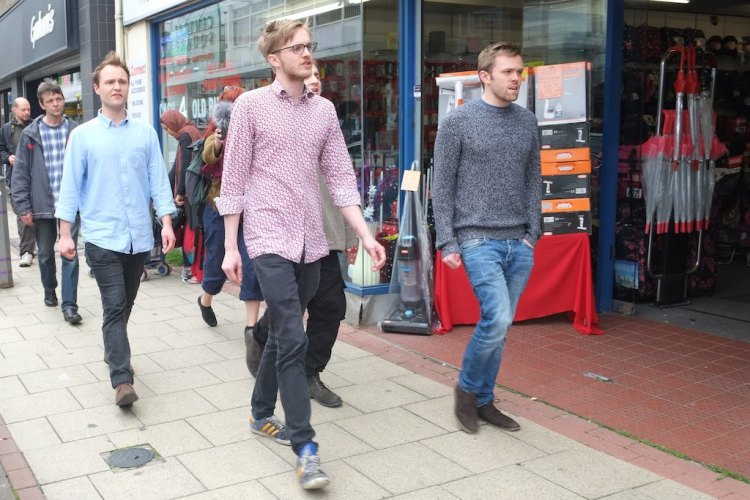 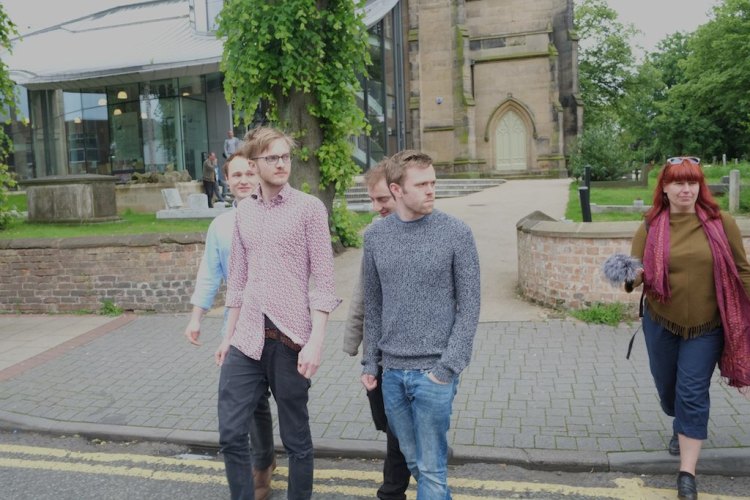 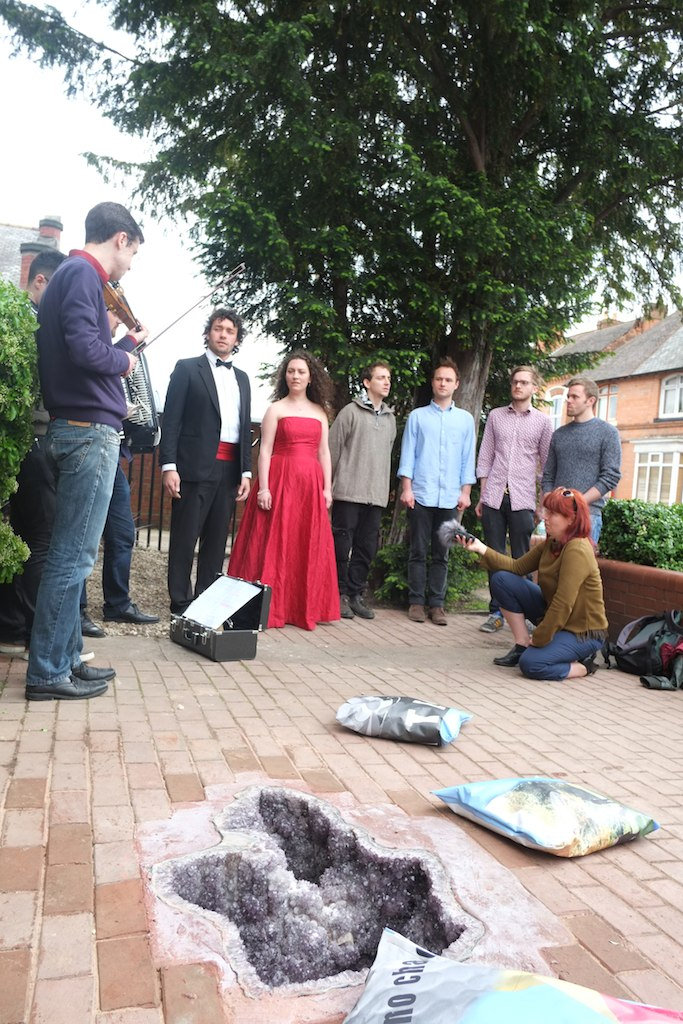 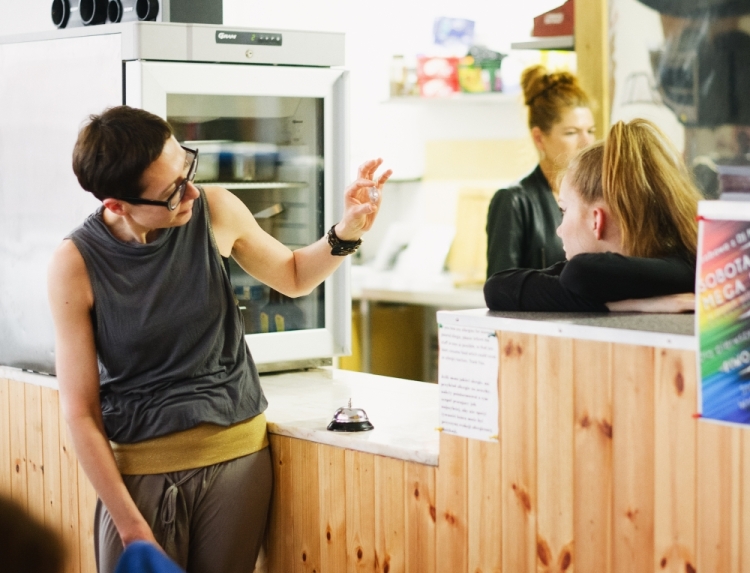 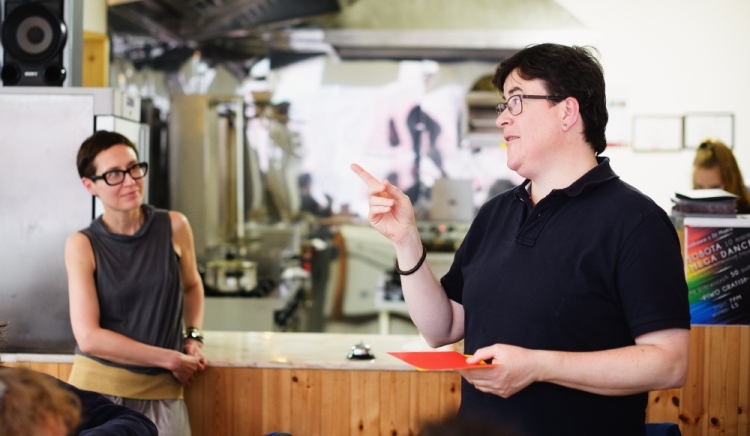 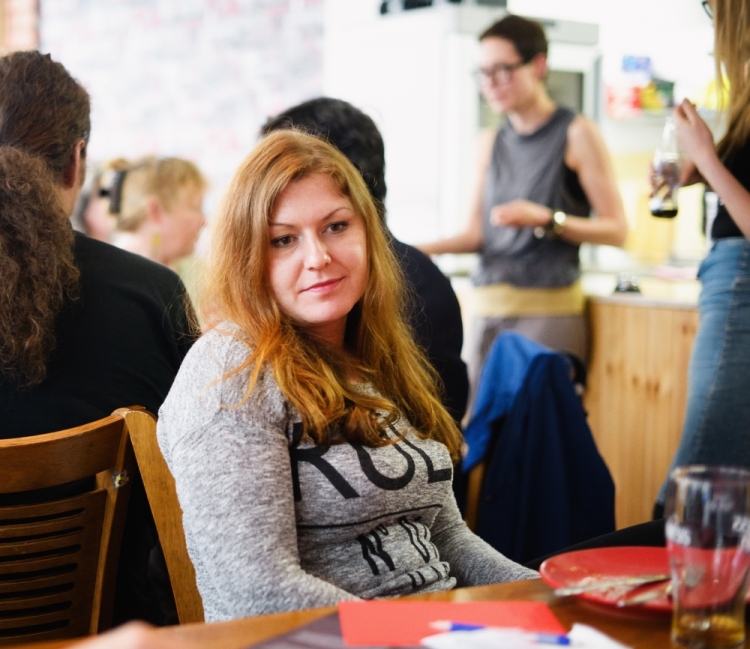 PEA presents Soon Everything Will Change by artist Joanna Rajkowska. Rajkowska is an internationally acclaimed artist based in London achieving recognition for her public art commissions. One of her recent works Forcing a Miracle has been displayed in London as part of Frieze Projects 2012. Soon Everything Will Change is her new temporary public project, conceived in Erdington, a district of Birmingham.

The core of the project is a large crystal formation installed in the patio near Erdington Library. Soon Everything Will Change comes from the notion of an impending crisis, with a strong unsettling sense of a change coming. Climate change proceeds alongside the melting of belief in the rationale of the Enlightenment legacy of European culture. The changes are and will continue happening globally and cross-culturally. What we need more than anything is a wonder, a supernatural phenomenon.

Soon Everything Will Change is not a public project thought of as a site-specific installation, but rather as a travelling, global device – a mobile chakra. Installed in the public space, it discreetly glows for everyone. Apart from the function intended by the artist, people will invent their own reason for its presence. Its ambiguous status as a ‘jewel’, healing object, street wonder and, above all, a sculpture questions the pragmatic definition of public art. It is an object that disarms, shifts our imagination and mesmerises our perception. And perhaps it really will become a chakra, a focus of energy for the district.

Rajkowska has undertaken several residencies and visits to Erdington, during which she has learnt about the specificity of the district in order to determine the concept and nature of the work. The whole process has been documented on our blog www.publicarterdington.wordpress.com.

The project will be opened with a performance by singers from the Waste Paper Opera Company and accompanied by The Alternative Guide to Erdington. The Alternative Guide to Erdington is an extension of the main project, comprising of a collection of stories that aims to reveal another face of this part of Birmingham. To complement the commission and residencies that form part of theproject, PEA is organising a series of events including an artist talk, a photo walk, workshops, and a mini seminar on public art.

Soon Everything Change is the part of Public Art Erdington, supported by the National Lottery through Arts Council England, Birmingham City Council and Polish Cultural Institute in London.

Help us to gather unexplained, bizarre stories of Erdington and come to another gathering at ‘U Kumpla Café’ to talk about the new public artwork by the well-known artist Joanna Rajkowska. Soon Everything Will Change is a project that will open in Erdington on the 31st of May 2014. Join us at ‘U Kumpla’ café to chat about the project, meet the artist and to share your stories with us.

The Alternative Guide to Erdington, an extension of the main project, is a collection of stories that aims to reveal another face of this part of Birmingham. The stories will be later published in a booklet, so if you have a story, which we could used for the guide please come along and share it with us. All visuals in the form of photographs or drawings are welcomed! This is an informal gathering, open to everyone.

Places should be booked by sending an email to roma@polishexpats.org.uk

The evening will be accompanied by  snacks and drinks from the everyday menu. If you wish to choose from the full menu (below) of traditional Polish cuisine, please let us know (by emailing roma@polishexpats.org.uk) your selection by Sunday 18th of May, 5pm.

The event is free, but refreshments have to be paid for by participants.

In the heart of Erdington last Friday, PEA and Erdington residents joined together in U Kumpla café to discuss the exciting new public artwork project by the well-known Polish artist Joanna Rajkowska. Councillor Robert Alden, along with PEA members and local residents came together over excellent food and drink to support the project.

Alive with conversations about the project, the café was buzzing with those present on the night sharing personal recollections and experiences related to the Erdington area.  Guided by Joanna, these personal memories were carefully written down and collected and will become part of the project itself. 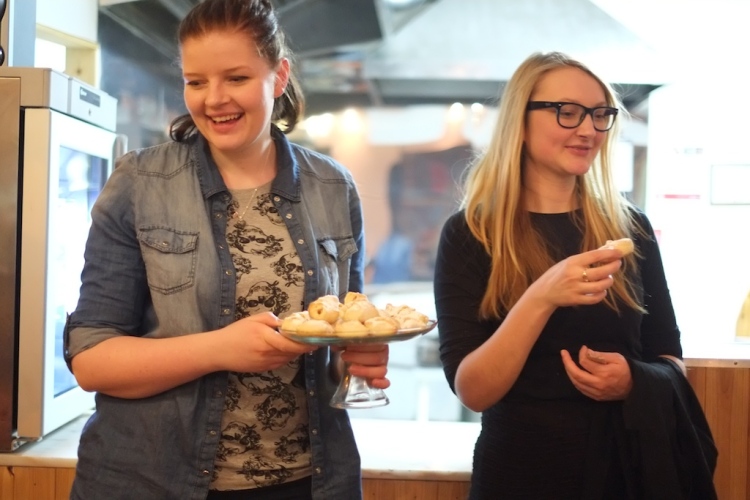 Also, a special mention to Dominika Bolon who is currently raising money for the charity Little Princess Trust. She will be cutting off her hair which will be made into wigs for those suffering from hair loss because of cancer and also raising money to pay for her granddad’s prosthetic treatment. To support this campaign please go online via facebook to find out more about her amazing campaign.

See photos from gathering at U Kumpla Café, where there was an opportunity to meet people involved and interested in the public artwork being created for Erdington by Joanna Rajkowska. As advised by Joanna, we were collecting stories that aim to reveal another face of this part of Birmingham. 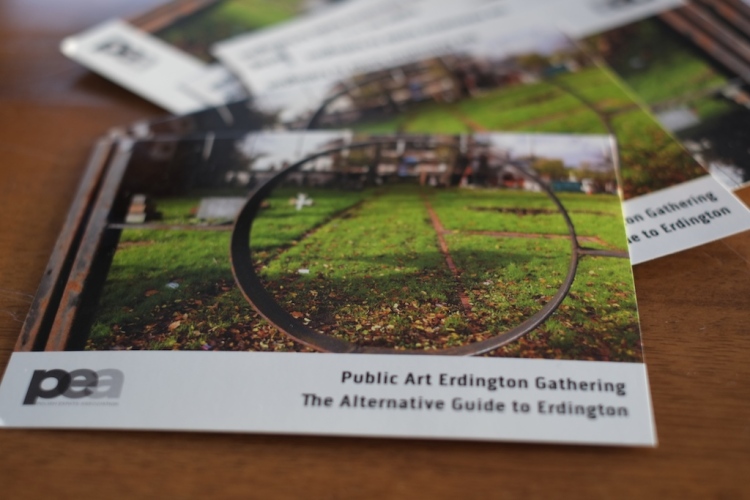 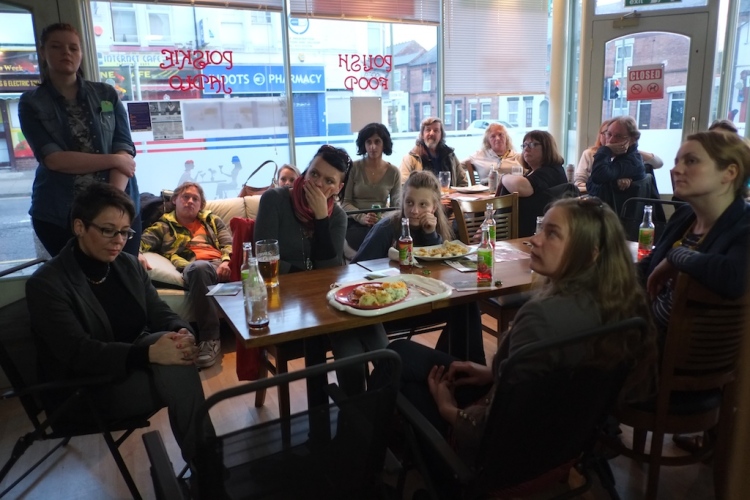 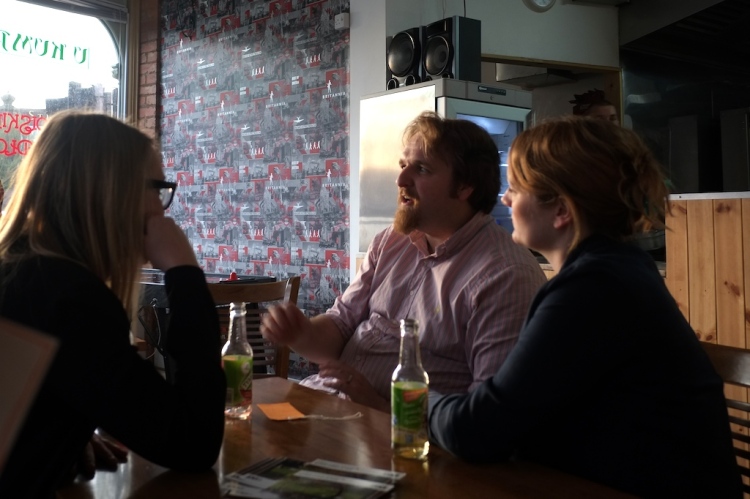 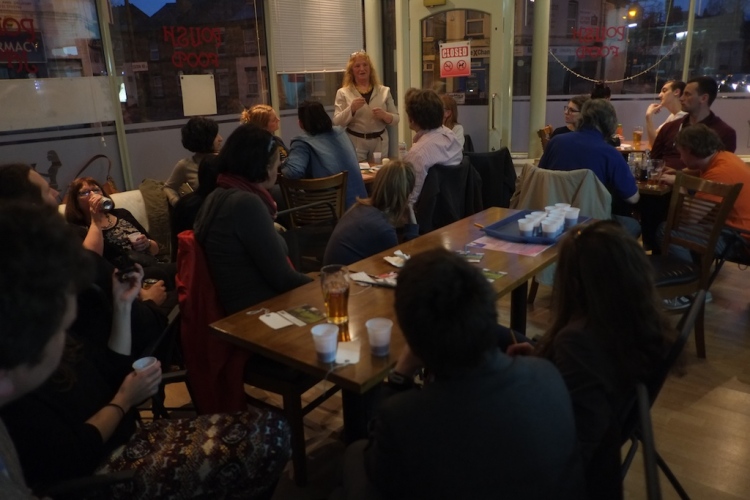 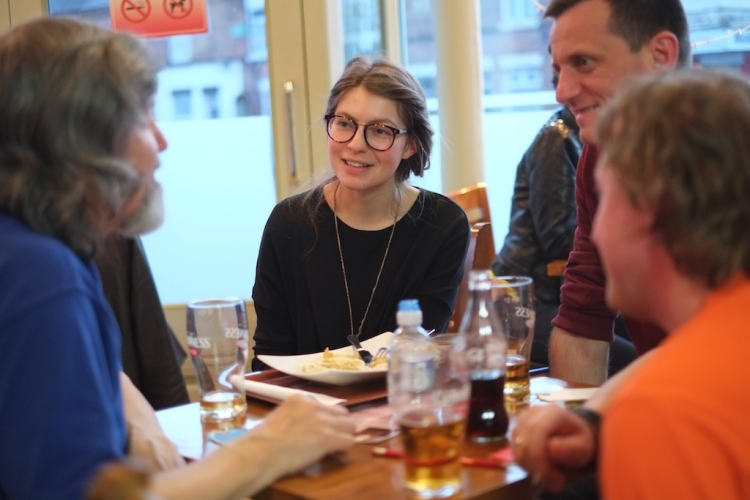 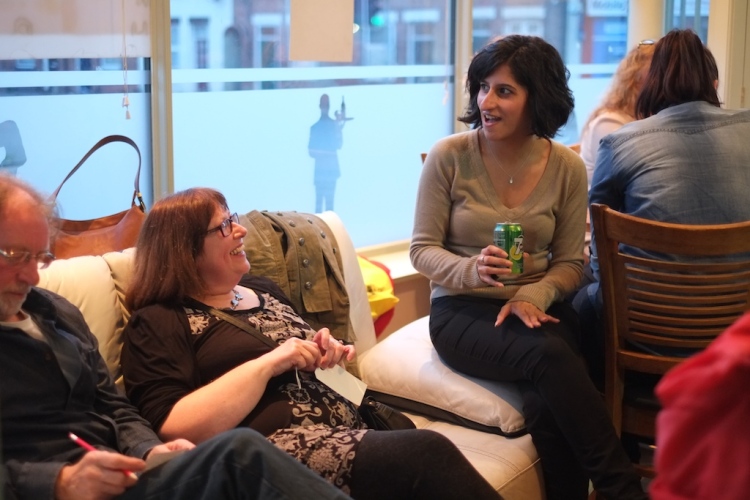 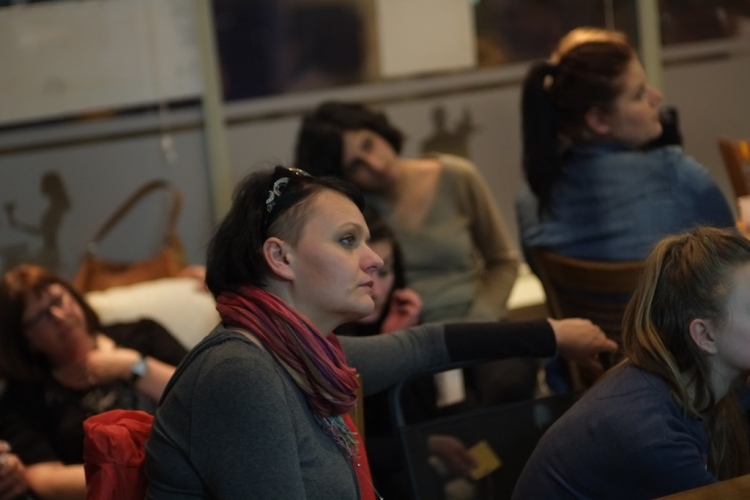 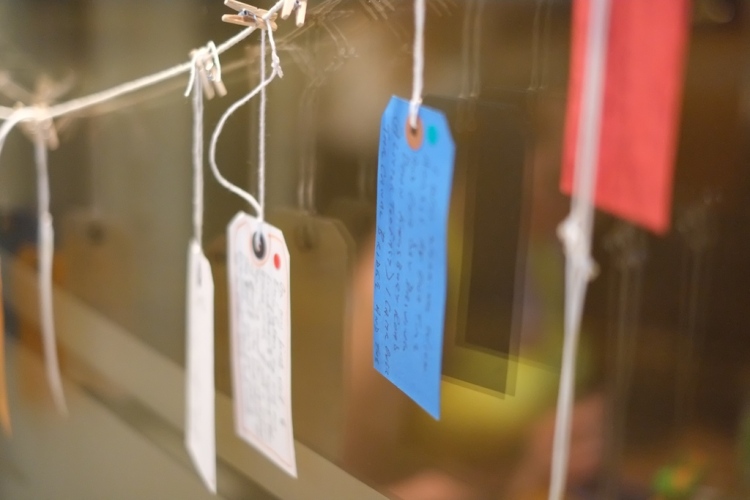 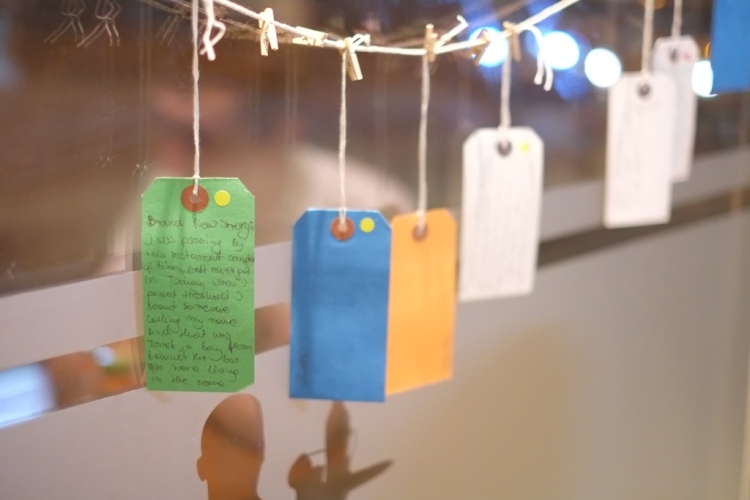 Joanna Rajkowska is creating a new public art project in Erdington within the city of Birmingham. To help us understand her current practice, we are publishing fragments from her new book Where the Beast Is Buried (2013). 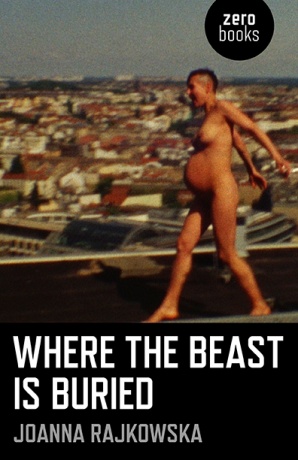 “I am primarily a herd animal, a social activist and hands-on artist in one. And that nothing interested me more than communities and how they are organised, that is, how people are with people. In summary, I know now where the bone is buried.”

“I don’t send out messages. I only produce a frame in which a given group, community or individual can formulate their own message. My task is to give the frame co-ordinates that are as relevant as possible.”

“It is evident that no translation, however good it may be, can have any significance as regards the original.”

Soon Everything Will Change is a public project that will open in Erdington on the 31st of May 2014. The Alternative Guide to Erdington, an extension of the main project, is a collection of stories that aims to reveal another face of this part of Birmingham.  Join us at ‘U Kumpla’ café in Erdington to chat about the project and to share your stories with us. This is an informal gathering, open to everyone.

The evening will be accompanied by traditional Polish snacks and drinks from the everyday menu. If you wish to choose from the full menu (below) of traditional Polish cuisine, please let us know (by emailing roma@polishexpats.org.uk) your selection by Thursday 10th of April, 5pm.

A selection of snacks and fast food will be available.

The event is free, but refreshments have to be paid for by participants.